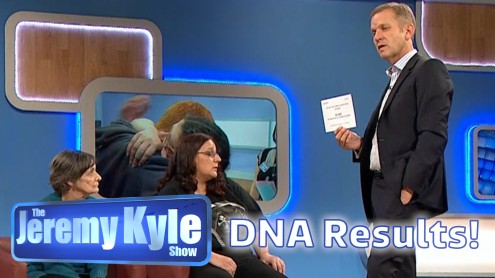 When I started researching my family mysteries, DNA was just for Little Mix and Jeremy Kyle.  The first time I really encountered DNA testing for genealogy was when I contacted my believed 3rd cousin twice removed, David Allen, for his thoughts on my great grandfather’s paternity.  David Allen had done a test which showed that he had a rare paternal haplogroup (the Y chromosome, which is passed intact from father to son) and as he was (hypothetically) related to my uncle, David Downing, via an all male line, if my uncle shared the same haplogroup, then it was almost certain that my hypothesis was correct.  I got lucky here – if there had been a female in the line, if I hadn’t had a willing male relative, or if David Allen had belonged to a common haplogroup, we wouldn’t have been able to do this.  I could have done a standard DNA test and compared it with David Allen but as our relationship is quite distant, the chances of our relationship being detectable were about 50/50.  The tests did match, and the Allens now have pride of place in my tree.

This piqued my interest, and I decided to get myself tested at 23andme.com.  23andme is not really a genealogy company, and though the results include a list of relatives, many of these will be people with no interest in genealogy, who got tested for health related reasons.  The only close match I had was my uncle, and I also found a third cousin on my father’s side.  I found myself unreasonably relieved to prove that I was related to both my parents, even though I had never previously questioned the fact.  However, this was really as far as I got with 23andme.  I had far more success with Ancestry DNA, which was launched in the UK in 2015. I got the test half price at this year’s Who Do You Think You Are live show.  Both Ancestry and 23andme allow your data to be downloaded, and you can then upload it to other sites for free (with the option to purchase additional features).   I will list these at the end of this post.  It’s worth mentioning that Ancestry does not have features such as the chromosome browser – its results are aimed at people who know little or nothing about how DNA works, so if you are interested in that or want to make your results watertight, it’s worth copying them to Gedmatch where you will have more features.  If you just want a list of possible relatives to chew your way through, stick to Ancestry!

The first thing both DNA tests will tell you is your ethnic composition.  This is a bit misleading as there’s no such thing as a “African gene” or a “Polish gene”, instead, they look at a bunch of African/Polish people and see which genes are common in those places.  I have dark skin and nearly-black hair and my mother is even darker, so I held out some hope that we had some Really Exotic Ancestry, but sadly this turned out not to be the case.  I am so White British that UKIP want to put me on a poster.  The results are quite variable depending on which site you use: Ancestry has me as 89% British, 6% Scandinavian, 1% Spanish; 23andme at 61% British, 4% Scandinavian, 0% Spanish, and MyHeritage at 45.9% British, 35% Scandinavian and 10% Spanish.  My research findings have me at 100% British, southern English at that, to the extent where my Yorkshire ancestors are the closest thing I have to exotic relatives. 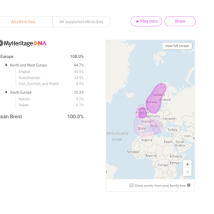 My friend Dan, however, had had a bit of a shock when his results came back informing him that he was nearly 50% Asian, despite having two very white parents.  The truth came out – his father was not his biological father.  This is the downside to DNA tests – you may uncover the wrong sort of family mystery.  I read a horror story on a forum about a woman who found a half sister who had been adopted out and was looking for her birth parents.  It turned out that the birth mother had been raped as a teenager and this was why she had given her baby away.  It was up to the poor genealogist, who had only joined up to look for her ancestors, to break this hugely upsetting news to everyone.

Fortunately, my test has not shown anything like that (yet).  While 23andme shows a lot of fascinating facts about your DNA (mine correctly predicts that I hate coriander and am not a natural sprinter) Ancestry is the more useful site to genealogists simply because there are more matches, and matches who are actually interested in genealogy. The way it presents the matches is also more genealogy friendly.   Nevertheless, I am still amazed at the number of matches who have no family tree attached and who don’t reply to messages.  Given the expense of a DNA test, I really can’t see why these people have bothered.  It’s a family mystery that I can’t solve and is very frustrating.

The first person I noticed when I got my Ancestry results back was Mark, the great grandson of Frederick James Allen, whom I had been in touch with previously (fairly fruitlessly, he was researching a different line and knew nothing about the Allens).  Mark is my half second cousin once removed and now the DNA had proved it.  This was great, as although the test with David Allen had convinced me, all it showed was that the two men had a common male ancestor, not who it was.

I was somewhat puzzled by the fact that at least half of my matches were related to me via my paternal great grandmother Phoebe Watts, until I contacted my third cousin Jennifer, who explained that her sister was a bit of a DNA buff and had persuaded the entire family to be tested.   Going through the list, I have found matches that relate me to six of my eight great-grandparents so far (and a lot further back in some cases).  The two outstanding great grandparents are Roy Olorenshaw of Belper, Derbyshire and Elizabeth Danby of  Great Ouseburn, Yorkshire, both on my mother’s side. Should you be related to either of these and are planning a test, please get in touch!

The jewel in the crown so far has been this match, though.

As you have probably spotted, the Downings are my family of most interest, and I am so pleased to see that I share DNA with Frederick, Annie, Henry, Joseph, John and Joseph‘s wife Mary at the very least.  The chances of getting a DNA match with a 5th cousin 3 times removed, by the way, are about 1 in 100.  I like to think that the Downing genes (probably the Downing nose gene) are very pervasive and this is what has drawn me to them.

There are some other, odder findings though.  I searched for matches who had people from Southminster in their tree, and straight away two matches came up who had some familiar names in their tree – William Dow and Sarah Drane of Southminster.  But William  and Sarah aren’t supposed to be my blood relatives.  William Dow was my 6th great aunt’s husband’s brother.  Now, there are a few possible explanations:

At the moment I have no way of knowing which is the case, but I’ll be keeping my eye on those pesky Dows.

I have two illegitimate ancestors that I am hoping I might be able to shed some light on, one is my 3rd great grandmother Elizabeth Southern of Easingwold, Yorkshire, who was born while her mother’s husband was away serving in the army, and the other is my 3rd great grandfather, Thomas Sharp Hope of  Frittenden, Kent.  At the moment I haven’t got very far with either, but am trying to spot any surnames that keep popping up in my Yorkshire matches.  Thomas is proving harder, since I have a lot of family from Kent and thus a lot of matches.  His father’s surname was presumably Sharp, but there’s an awful lot of those around.

The most annoying match in my tree is Ethan, my top match.  At 150cM, he is a closer match than my known third cousin.  From our shared matches, I can see he’s related to me via my father’s father’s mother, Emily Whibley, and from Googling his (unusual) full name I know he is American and younger than me.  This means he could well be from a very close branch that I know nothing about.  But Ethan hasn’t replied to my message, and has no public tree on Ancestry.  I hate Ethan right now.

So far I have only managed to add one branch to my tree that I didn’t know about already.  I noticed that the surname Pettit kept coming up, as did areas round the Kent/Sussex borders such as Wadhurst.  As I have some Pettits (but from Suffolk) on the Allen side I didn’t pay too much attention at first, but it didn’t add up – the Pettits were supposed to be on my mother’s side, but it is my father’s side who come from Kent and Sussex.  Eventually I did some digging, and found that a Thomas Pettit of Wadhurst, Sussex, was the biological father of my illegitimate 4th great grandmother Charlotte Reed (documented in a bastardy bond, and unusually, his will), and of at least ELEVEN other children by four different women.  No wonder there are so many Pettits in my matches!

I think DNA testing for genealogists is only really just starting to get off the ground and there will be a lot more interesting discoveries to come.  At the moment, the vast majority of matches are American, and their trees tend to stop when their ancestors came to the US (US censuses just record foreigner’s places of birth as England or whatever country, and not the town, which makes it very difficult for American genealogists to take their research back to native countries, and very hard for me to join them up to my tree).  I could talk about this subject all day, but I’ll leave you with a few links that will come in usual should you choose to go down the DNA route yourself.  Also, just for a bit of fun, here is my eye as predicted by my genes on gedmatch.com, and a photo of my actual eye.  I think the generated eye is better – what a lovely shade of green – but I’m impressed at the way it’s got some of the finer details right.

6 thoughts on “What I Learned From My DNA”