This is a tale of “from riches to rags”. As well as being a tale of riches, it’s a tale of Richards. Many Richards. The Beales liked to call their oldest sons (and heirs) Richard, and therefore pretty much anyone who is anyone in this family is either called Richard or has Richard as his middle name. I will therefore give them all nicknames, in the hope that you’ll be able to follow this story.

Rich Richard came from a long line of successful Beales in Biddenden. They owned a beautiful country house called River Hall, which is still in existence now. Built in the 1400s and refurbished in the 1700s. It is now a listed building, probably worth several million pounds (it has not been sold for a long time, but similar properties nearby have). It had been passed down through nine generations of Beales before this story begins. In the 17th century, the Beale had run a very successful cloth making business, and invested the returns in multiple properties in Biddenden, from which they now made money from rent and farming. Said Early Beales had massive altar tombs in the churchyard at All Saints Church, Biddenden, and plaques in their memory within the church. They were clearly very rich and highly respected.

But Rich Richard was the last Beale to be remembered in this way. The Beale fortunes had reached their peak with him and the Beales owned multiple properties in Biddenden – River Hall, the Cot, Elmstone, Omenden, Podkin, Wagstaff and about 600 acres of the total 8000 that made up Biddenden parish (most of these buildings are still here to see, and I highly recommend a visit to beautiful Biddenden). When Rich Richard died, his will was proved by the Prerogative Court of Canterbury (in other words, the place where rich people’s wills are proven). He left the bulk of his goods to his oldest son, Crusty Richard, and divided the rest more or less equally amongst his remaining sons. The will gives a good picture of the massive extent of their wealth. He and his wife were buried in the family plot, and their children erected a plaque in their memory which is still displayed in the church.

Crusty Richard, however, wanted very little to do with the rest of the family, and instead of living in River Hall, he moved into a cottage on Biddenden High Street, now The West House (quite a step down from the Beale property he had occupied before his parents’ deaths, Dashmonden – though in its current incarnation as a rather smart restaurant, it might be more suitable for the rich Beales now). Crusty Richard is listed in the census as a grazier, evidently the cloth business had gone out the window, as it had for many in the 1800s. It seems he allowed his only son, Unlucky Richard, to live in River Hall with his wife, Elizabeth Greenall, and their twelve children. (With such a big family I guess they needed a big home). In 1871 all seems well – River Hall has been turned into a farm, and the census reports that Unlucky Richard is a farmer and grazier of 300 acres, employing three men and one boy. Not filthy rich like his grandfather, maybe, but earning a good living. However, they had not lived there consistently – his 1841 wedding had taken place in London and it seems River Hall was being rented by a farmer called John Brown on the 1841 census. In 1861 and 1862 adverts appeared in the local paper putting River Hall up for rent. Mysteriously, there was also an advert in 1853 placing River Hall up for sale at auction, but I can’t find any indication that it was actually sold, since it was in Beale occupation on the 1851, 1861 and 1871 censuses.

But when Crusty Richard died on 19th November 1874, everything had changed. Unlucky Richard had already had a hard time, when in 1860 his soldier son Richard had committed suicide aged 17. The newspaper report intimated that he had wanted to leave the army, but his parents had refused to allow this. On receiving a letter to this effect, and after one harsh word from his sergeant too many, Soldier Richard had taken his rifle out on the pretext of cleaning it and instead shot himself in the head.

Sometime after 1871, Unlucky Richard had cleared out of Kent altogether, and was running a pub in Stoke Poges, Buckinghamshire (near Slough) called the White Hart, with his son Herbert. (There is an article in the Bucks Herald which tells of Richard and Herbert being the victim of drunken thieves in the pub. Richard is mentioned as being at away in Kent soon after the robbery.) Crusty’s Richard Will (my transcription, apologies for any errors – it isn’t the easiest handwriting), written two days before his death, makes quite interesting reading, mostly for what it implies but doesn’t actually say. The jist of it is as follows: Sell everything but the house which my wife lives in. When she dies, sell that too. First pay off my debts and funeral expenses. Then invest the money left, however you my trustees (his wife, Unlucky Richard, and his solicitor and friend William Glover Mace) see fit, pay the income equally amongst my four children. It’s not said, but it seems to me that the intent here is to provide for his children equally, but to cut all ties with the Beale heritage and not let anyone get their hands on the “big money” immediately. Perhaps there was someone in or close to the family he didn’t trust to behave responsibly? But who? It couldn’t have been Unlucky Richard, because he was one of the trustees.

I can’t find a reference to the sale of River Hall in the papers, but it seems it was sold pretty swiftly (there are adverts for the sale of other Beale properties though, all in 1874, some before Crusty Richard’s decease) and a mass Beale exodus occurred from Biddenden. By 1891 Biddenden was an entirely Beale-free zone. What happened to the money is anyone’s guess, but it doesn’t seem have been invested wisely. Sarah Beale (Crusty Richard’s wife) died in 1878. I can find nothing about the solicitor which suggests him to be anything but an honest and scrupulous man, which only leaves Unlucky Richard as the culprit. Strangely, though the Beales decline in fortunes is very obvious from the official records, there is nothing whatsoever that pertains to the reason for the demise. No bankruptcy records, no criminal proceedings or lawsuits, no newspaper reports. It seems like the world lost interest in the Beales when they left Biddenden. All I have had to base my conclusions on is rumour and conjecture. My 90-year-old aunt tells me that the Beales lost their money due to gambling – she heard this from her mother, whose grandfather was Crusty Richard’s brother, born at River Hall. I’ve also heard the same story from a distant Beale cousin, and also that the ruin was due to a “bad debt”. My conclusion is that wherever the money was invested (if it was invested at all) it was lost and that the children never received their income. The three girls would have been ok, as they had husbands, but for Unlucky Richard, who was in his sixties and presumably looking to retire on his father’s money, this was a catastrophe.

In 1881, Unlucky Richard and Herbert are still afloat, living in a modest house in Camberwell, London, Richard’s wife having died in 1879. But after that, everything went to pot. In 1887, Richard applied for a grant of administration for Elizabeth’s belongings, suggesting that some kind of financial wrangling was taking place. At the time, he was living with another son in Deptford, Augustus, who was a policeman. In January 1890, 73-year-old Unlucky Richard was admitted to Greenwich Workhouse. Herbert was nowhere to be seen and family rumour (totally unproved, although I have found records of a Herbert Beale joining the Quakers in Tipperary!) has it that he escaped to Ireland. There are a few irregularities amongst the records I’ve found for Unlucky Richard’s children. One daughter, Lucy, totally disappears after 1861 (no possible marriages or deaths located), a son Horace ends up bouncing between the Strood workhouse and his son’s wife’s family home, but is missing between 1861 and 1891 and returns with a very specific false date of birth. Two more daughters (Laura and Ellen) give their father’s name as “Thomas Beale” on their marriages in their 1875 and 1878 marriage certificates (was Richard trying to hide from something – or were they trying to hide him?) Laura was apparently cut off from the family because she married a poor groom and this seems a bit hypocritical in the circumstances! The six other children who were still alive at this point all seem to be doing fine though, and it seems very sad that none of them could take their elderly father in.

Unlucky Richard died in the workhouse in 1893, the cause of his death being given as “senile decay”. He left no will, and has no known grave. A sad tale of a man who was born into riches and died with nothing and nobody.

Grave of Crusty Richard and his wife, Sarah Elphicke 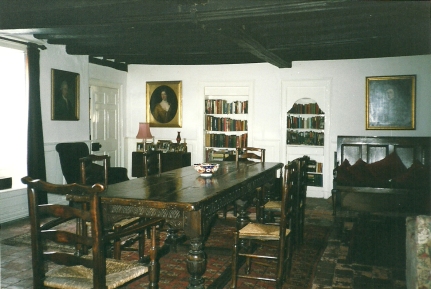 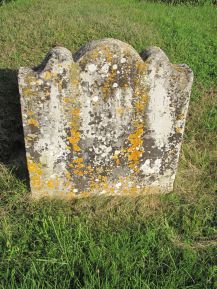 Grave of Rich Richard and his wife, Frances Witherden 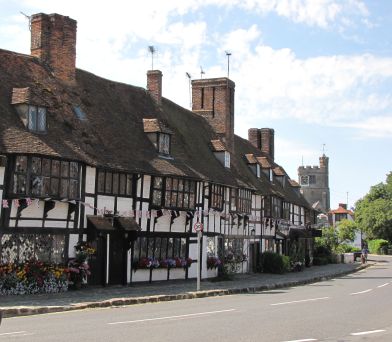 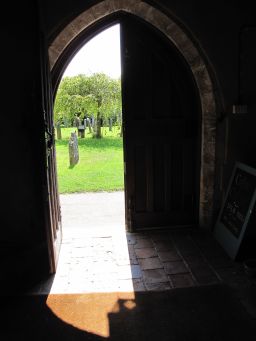 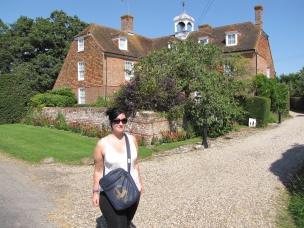 Me, outside River Hall

Beale plaque inside the church

Beale plaque inside the church

Biddenden High Street, 1883. Crusty Richard’s house is the one to the right of the pub.

Biddenden town sign, with the famous conjoined twins, the Maids of Biddenden

With many thanks to all the my Beale cousins with whom I’ve exchanged notes with over the years, and also to the Biddenden Local History Society . The Beales are certainly a family that attract the attention of genealogists. Geoff West (whose words inspired the nickname “Crusty Richard”), Angela Godfrey, Dawn Christenson, Glenda Beale, Margie Beale, Sue Beale, Lucy Beale… I’m really sorry if I’ve missed anyone! If you have any more information on the Beales, especially what happened to their fortunes, I’d love to hear from you.

15 thoughts on “The Beales of River Hall”