Jack and Herbert were the children of Emily Downing, the oldest daughter of Henry Downing.  They were cousins to my great grandfather Frederick.  Emily had already had a lot on her plate – both her parents had died before she was thirty, leaving her with a brood of younger siblings to look out for, two of said siblings had died in tragic circumstances, and she had no less than eleven children of her own, including three who had died in infancy.  Emily is remembered by her descendants as a rather authoritative woman who had strong opinions about her children’s lifestyle choices, particularly their choice of partners.  I wasn’t surprised to learn that she was a tough lady.  She had had a lot to cope with.

Jack Gillingham was Emily’s sixth child.  In 1921, aged 19, he married Cecily Louisa Burrows.  Emily was unhappy because at 28, Cecily was nine years older than him.  In fact, she refused to have anything to do with them until Cecily became pregnant and gave birth to a tiny, sickly baby, whom she named Hilda Jean.  Emily apparently turned up at their home with “all the necessary equipment” and helped Cecily save the baby.   At home in Southend at the beginning of the war, before conscription began, he enlisted as a War Reserve Constable with the Borough Constabulary, a special voluntary police officer, whose job it was to keep civilians safe, while many of the regular officers were away.

On Monday, 14th October, 1940, one month into The Blitz, Jack and Cecily were in their garden in The Grove, Southend, when a single German raider plane flew over Southend.   Hilda had been washing her hair inside the house, and was just stepping outside to join them.  The plane had been intercepted by a British fighter plane over a Medway town and was fleeing under heavy machine gun fire.  As it did so, it dropped two bombs on to the town.  One landed in a road, without casualties. The other landed in the Gillingham’s garden.

Jack and Cecily were killed outright.  Hilda was badly hurt, and taken to hospital where she underwent surgery.  Had she finished washing her hair a few minutes sooner, she would have been killed too.  She survived, and it is from her descendants that I learned most of this story.

Jack and Cecily are commemorated on a plaque outside Southend Police Station in Victoria Road.  They were buried in Sutton Road cemetery in Southend, though have an unmarked grave.  The write up in the Southend Standard knocks a few years off Cecily’s age, and I wonder if Emily had a hand in this! 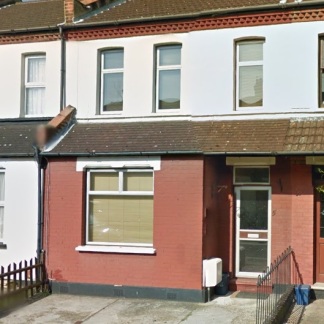 The plaque at Southend Police Station

For Emily, losing a son in such tragic circumstances must have been unbearable.  But there was more to come.

Herbert Gillingham lived thirty miles away from Southend in a place called Ilford, on the London/Essex boarders.  He was married to a lady named Evelyn Wignall and they had six children aged twelve or younger..  It was the night of 10th May 1941, seven months since Jack and Cecily had been killed and the final night of the Blitz.  Hitler organised a huge airstrike on London, in which 1486 people were killed and damage was inflicted on almost every part of the city, including The Houses of Parliament.  Most people were spending the night in air raid shelters, but one of Herbert and Evelyn’s children was suffering with measles and were not allowed to go.  The oldest child, Peter, spent the night elsewhere.  The rest of the family were inside their home at 124 Park Road when a huge high explosive bomb, possibly aimed for the factory behind, landed squarely on the house, destroying it and killing everyone inside.  Maxine (2), Raymond (5) and Tony (6) were all killed instantly.  Herbert, Evelyn, Pauline (9) and Douglas (11) were taken to King George’s Hospital, but all died the same day.  Several neighbours were also killed.

Unlike Jack Gillingham’s house, 124 Park Road was damaged beyond repair and was demolished.  A spartan looking parking lot now stands in its place.  The death of Herbert and his family did not warrant a report in the local paper, or a plaque.  I haven’t been able to locate their graves. They were just names amongst the thousands that had died that day, and the people of London had become used to it.  (Imagine the reaction if seven people were killed by a bomb today and contrast that against the silent, stoical way people dealt with the destruction of their city and people during the war.  Perhaps times aren’t so bad now after all).

I have not been able to find anything at all out about what became of the oldest son, who must have returned to Park Road the next day to find his home gone and his family dead.  He went to being the oldest child in a loving family to being an orphan.  I hope he found a kind hearted relative to take him in, but until more records from the 1940s onwards become available, I just don’t know.

With thanks to Marianne and Keith Simpson for the information on their family!

One thought on “Jack and Herbert Gillingham: Civilian War Dead”